The following post is something that my wife wrote a year after Maddi had her open heart surgery and subsequent pacmaker surgery.

I have been unable to sleep lately. My mind has been racing of thoughts about where we were a year ago. At about this time we were in the PICU at MMC trying to get some sleep and holding Madilynne as much as we could because we weren’t sure when we would be able to hold her again. Her 1st heart surgery was first thing the next morning. A couple nights before she was rushed to the PICU because she was having such a difficult time breathing. The doctors kept telling Shawn and I that we need to leave the hospital and try to get some rest. Were they crazy??? How can I leave my baby girl who is SO sick, how could I not be there if something happened? I had no intention of going anywhere.

The morning came all too quickly and our families all came to support us and sit with us in the waiting room for what felt like days! As they took Madilynne away to the OR, I remember feeling ok. This was just a walk in the park. Finally the doctor came out to let us know that it was over and it went great. He said there weren’t 2 holes like we had originally thought but my little angel had about 8 holes in her heart. They had to get her settled before we could see her. With a sigh of relief we waited and waited until the nurse came to get us to tell us we could see her.

Finally they came to get Shawn and I. We went in to the room and I just stared at her. She was so tiny in that big bed with more tubes and wires then I could count. Suddenly everything in my chest hurt, a hurt like I had never felt before, it was almost as if I was laying there and could feel every inch of her pain. I left the room as my stomach turned and went to the waiting room. That feeling of ok I had that morning was gone. I lost it! Totally fell apart. I ran out of the hospital and outside were I tried to catch my breath and I couldn’t. The pain was so real! The physical pain in my chest was so intense. I remember sitting out there for a long time waiting for the pain to go away. I pulled myself together and went back inside. I tried to digest what was being said to us by nurses and doctors. I gently touched her, with great fear I might add and then sat by her bed as much as I could. A week later was another heart surgery to have her pace maker put in. More anxiety and more waiting but I must say the 2nd was nothing like the 1st. One day while still in PICU I called the nurse in because I was concerned that she seemed so red in color to me. The nurse patted me on the back and whispered in my ear…”That is what color she is supposed to be”.

I look back at all the pictures posted on here and the comments that went with them and smile. It amazed me that during such a troubling time the support was just as surreal as the surgery. My daughter has been through more in her life then any child should have to go through but she does it all with a smile. She has taught me so much and I am so grateful and proud to call her my Madilynne!

A year later she is so full of life and energy! It is amazing to me how far she has come. Her teeth are almost through and we are so close to mastering sitting. She is still working on the eating thing and getting better at it day by day. Again thanks to all our family and friends for all the love, support, and prayers!

Find what you need! 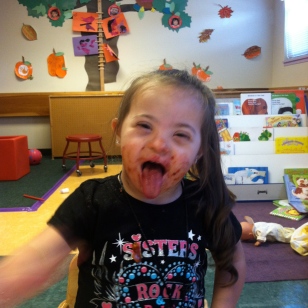 I really get into my food. 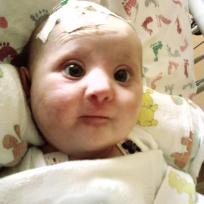 “Do I have something on my head?”

Oh wow those were some strong painkillers

Yeah I can walk the Buddy Walk this yearI r 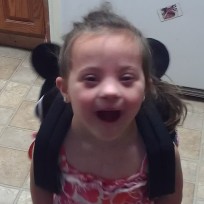 I am sooo ready for school 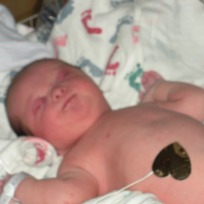 Hi my name is Maddi and I an new here

This WordPress.com site is the cat’s pajamas

The Daily Advocate By Painspeaks

Advocacy is FREE and its never-ending ripples spread awareness for all worthy causes!

Teaching Reading to Children with Down Syndrome

this is... The Neighborhood

the Story within the Story